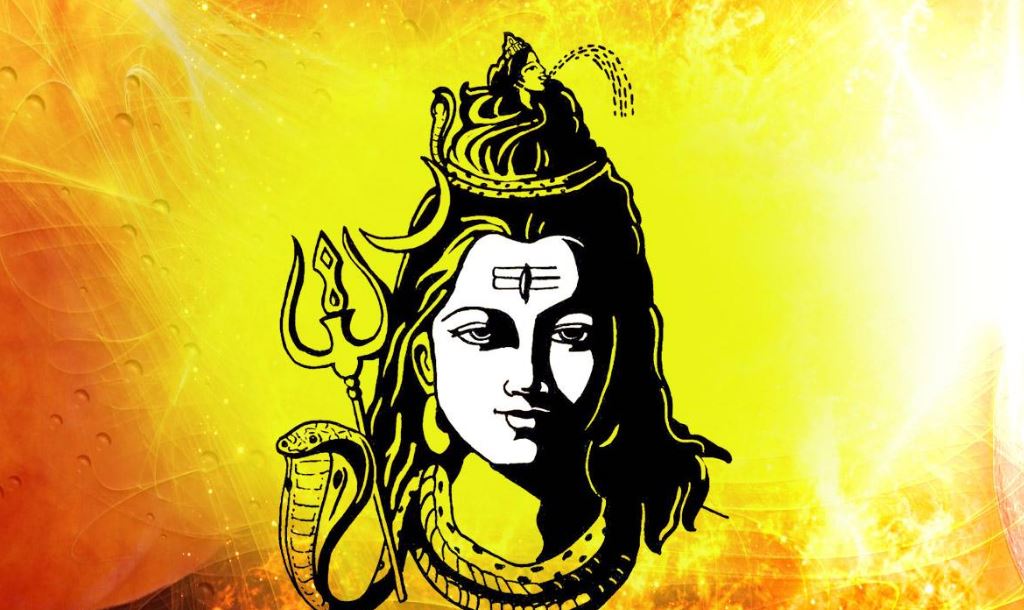 The bestower of Knowledge

Essence of the jnana yoga

Self-realization is not an invention. It is only the discovery of the Self. It is knowing one’s Self. It is awareness. Self-realization is nothing to be attained afresh. You need not reach or attain the Atman or the Self. You are, indeed, the Atman or Supreme Self. Only, you will have to open your inner eyes. The Vedanta philosophy summons the individual to his own freedom, glory, and dignity. Know this source of freedom, the root of bliss, and be free.

Dakshinamurthy is verily the pure consciousness (Siva) which assumes a form as our preceptor. Therefore there is no difference between the lord and divine knowledge! Lord Siva is the parabrahman of Vedas and is essentially nirguNa (attribute less).

A young guru, imparting knowledge of Brahman (Absolute Truth) through silence, surrounded by saints who is teacher of teachers, whose gesture signifies wisdom, whose nature is fullness, smiling, reveling in himself, seated on the ground under the banyan tree, bestowing knowledge to all the rishis who have assembled near him.

Salutations to Lord Dakshinamurti, the abode of all wisdom, teacher of the whole world, healing those who suffer from the disease of samsara.

A standard procedure of knowledge path

In the Brihadaranyaka Upanishad, there is a conversation between the great sage Yajnavalkya and his wife Maitreyi in which he said to her:  “The Self, my dear Maitreyi, should verily be realized. How? “It should be heard of, reflected on and meditated upon. By the realization of the Self alone, my dear, through hearing, reflection, and meditation, all this is known.”

It is indicated that the non-dual teachings are to be received and absorbed in a process consisting of broadly three stages: Shravana (listening), Manana (reflective thinking) and Nididhyasana (steady contemplation).

The term “śravaṇa” has a very significant and a technical meaning in Vedanta. It is the first of the four-staged process of jnana sadhana or vichara, which is also called as “Self-enquiry”.

The Acharya in Vivekachudamani clearly states that it is only through “vichara” (enquiry) that one attains Brahma-jnana and hence moksha.

Sravana is the first step of this process. It involves listening to the import of the scriptures and the mahavakyas, followed by manana– reflecting on the teachings heard, and niddhidhyasa– contemplating on those teachings, which ultimately leads to direct realization of the true nature of Atman i.e. Brahma-jnana.

What is the practicality of the above teaching? Swamiji says: ‘With God, every knowledge is sacred; knowledge is God. Infinite knowledge abides within everyone to the fullest measure. You are not ignorant, though you may appear to be so’

Swamiji says that all kinds of weakness is the offshoot of ignorance of this glory of the Self. After a failed attempt to discover the divinity in various gods outside of himself, a man comes back to the Human Soul, the point from where he started. And, there, he finds the God whom he was searching for.

Swamiji calls upon humanity to understand the above truth and discover the divinity within: ‘There is but one Infinite Being in the Universe, and that being appears as you and I’.

Swamiji exhorts people with the ever-inspiring message of Vedanta:

You, as body, mind, or soul, are a dream, but what you really are, is Existence, Knowledge, Bliss. You are the God of this universe. You are creating the whole universe and drawing it in. Thus says the Advaitist. So all these births and rebirths, coming and going are the figments of Mâyâ. You are infinite. Where can you go? The sun, the moon, and the whole universe are but drops in your transcendent nature. How can you be born or die?’

Swamiji explains this great statement in this manner: Vedanta teaches that man is bound by his five senses. But, why should the soul take to itself a body? As one can see one’s own reflection in the looking glass, the soul is reflected in the body. The soul itself is God; and every human being has a perfect divinity within himself, and each must show his divinity sooner or later.

This Vedanta, the philosophy of the Upanishads, I would make bold to state, has been the first as well as the final thought on the spiritual plane that has ever been vouchsafed to man

All mental activities are rooted in the I-thought. The mind is its thoughts. Know that the ego is the mind. Meditating “from where does this I come” the ego falls away. This is Self-inquiry. When the ego is destroyed the pure I, the heart opens by itself as the supreme fullness of being.

Another method of Self-inquiry is to trace our waking consciousness back to the awareness that persists even in deep sleep when the mind is put to rest. That deep sleep I am the real Self, while the waking ego is an illusion. Once one has learned Self-inquiry in the waking state one must carry it over to dream and deep sleep for it to be really efficacious.

Another method is to meditate on “What is knowledge?” The real knowledge is devoid of any object to be known. It is self-luminous self-aware wisdom. The highest knowing is going beyond knowledge. This is not a mere theoretical leap but a revolution at the core of consciousness.

The soul becomes Divine by achieving that state beyond bondage and release. This is the supreme goal of practice that is beyond all goals. To reach it is a Divine gift and follows from all the practices set forth in the previous verses. This bliss that is our origin and end as the Upanishads say.

The third eye is a symbol for Shiva devotees to develop the sight of knowledge.